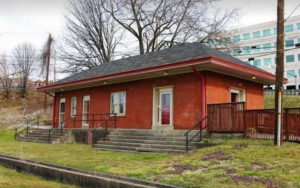 The outbound Conshohocken Station building located on what was the Schuylkill Branch of the PRR.  This structure is still standing a short distance north of the Schuylkill River Trail, and currently being used as a coffee shop.

On Saturday morning, June 10, 2017 the Philadelphia Division held its meet at a new venue, the Plymouth Fire Company #1 in Conshohocken, Pennsylvania. The first agenda item was our annual business meeting and the election for Board of Directors. Superintendent Joe Bergmaier greeted the attendees and called the meeting to order. While the election committee was busy counting votes, Treasurer and Webmaster Howard Kaplan delivered his reports. With the counting complete, Clerk Mark Wallace proceeded to give his membership report followed by the announcement of the election results. The newly elected Board members were Charles Butsch, Rob Hinkle, John Seibert, and Howard Kaplan. Alden Smith was thanked for his participation as a candidate in the election.

Members who attended last November’s meet will recall the wonderful presentation given by Jeff Witt on the legendary John Allen and his model railroad, the Gorre & Daphetid. This time Jeff delivered part two entitled, “John Allen in Print: A Survey of his Publications.” With his collection of material from the Gorre & Daphetid Reminiscense Project (GDRP) Jeff unfolded the story of John Allen’s prolific work page by page, year by year, and cover by cover–from magazines from both home and abroad.

After a break of chatting, sipping, and munching, we returned to the second half of the program. Achievement Program Committee Chair Earl Paine proudly pointed out how many members are on track to become Master Model Railroaders. He then presented a Golden Spike and certificates for Scenery and Prototype Model to Nick Brownsberger, who, by coincidence was to be our next clinician. Prior to Nick’s clinic, Director Rob Hinkle delivered his reports regarding the Division’s Facebook page, a plan for linking layout owners with operators, and planning for the 2019 MER convention we will be hosting.

Nick Brownsberger’s presentation was on “DCC Wiring for Model Railroads Using Digitrax Components.” It could be described as a discussion of wiring for the DCC beginner, but including a lot of valuable information for experienced modelers on how to wire a layout. Topics covered included converting a DC layout to DCC, power supplies, command stations, boosters, power districts vs. blocks, and much more. Nick is truly a high-tech modeler, having implemented and continuing to implement the most state-of-the-art controls on his layout. Nick has generously consented to have his presentation posted on the Division website, and both the PowerPoint and PDF formats can be found in the Library section under Articles/Clinics.

One of our guests, MER Vice President Kurt Thompson from the Chesapeake Division then introduced himself and discussed some of his duties and related MER business.

From there we turned to the drawings for door prizes and the 50/50 raffle. This time the raffle was won by none other than Superintendent Joe Bergmaier (we really have do a better job of mixing up those tickets).

As usual the afternoon session consisted of home layout visits. In this case, one of the “homes” was the Lafayette Hill Masonic Village, whose layout was open to attendees. And we were glad to see some of the layout guys in attendance at the meet. Also Alden Smith kindly opened his wonderful Western Maryland to us. And since Mike Rabbitt had recently moved there was no layout per se, but still lots of steel mill to look at.

Thanks are in order to Mike Petriga from the Plymouth Fire Company, who not only accommodated our needs regarding the physical setup, and not only purchased several Division patches, but proceeded to join the NMRA as a railpass member. Thanks also to the layout owners, the clinicians–Jeff and Nick, to Chip Stevens for once again manning the video camera, and to all the members who attended. We hope you enjoyed yourselves. Next meet will be at yet another new venue in Exton, PA in September. Hope to see you all there!

PhillyNMRA © 2018 Frontier Theme
Next Up