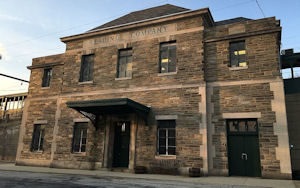 On Saturday June 9, 2018 the Philadelphia Division met at another new location, the Philadelphia First Church of the Brethren located on West Cheltenham Ave, in Wyndmoor, PA.  The morning session began with our Annual Business Meeting where various reports were presented and the votes counted for our Board of Directors election. This year Assistant Superintendent Rob Hinkle chaired the meeting for an ailing Superintendent Charles Butsch. While the election committee was busy counting votes, retiring Director and former Superintendent Joe Bergmaier was thanked for his years of service going back to 2010. Clerk Mark Wallace gave a short report on membership numbers and briefly reviewed the insurance program the NMRA provides to its members and 100% clubs.

Earl then put on his other hat as Achievement Program Committee Chair and in consultation with our Achievement Program Manager, David Messer, MMR (who could not be present), presented a respectable report of members who have earned quite a few certificates. Earl presented the AP certificate for “Electrical” to Don Borden, “Volunteer” to Adam Eyring, and a Golden Spike to John Trout. Earl went on to list those who have won Golden Spike awards indicating that many folks are working on their layouts. That is a sign the hobby is alive and growing.Then Treasurer and Webmaster Howard Kaplan delivered his reports, with Earl Paine following up with his final report as The Dispatcher editor. Earl has been editor for over eight years and has been shifting the newsletter production over to our new editor, Howard Kaplan. Howard and Earl have been sharing the production and editing of The Dispatcher for well over two years. A call went out for articles and to anyone interested in writing about their model railroad experiences to do so and submit them as an article. The model railroad experience is different for everyone and the sharing of your experiences are always welcome. The online readership of The Dispatcher is quite large.

Rob Hinkle then provided an update on the exciting planning for the 2019 MER Convention planned for October 2019 at the Crown Plaza Hotel located in King of Prussia. Most reports were greeted with good questions and short discussion.   The meeting was suspended while our morning program proceeded.

First up was Val Pistilli’s “Why Do Trains Derail?”  Val, who is an NMRA life member and well known local model railroader is in several clubs, round robins and operating groups, did a PowerPoint presentation describing the variety of reasons why model trains derail. Issues from track alignment, joints, car and wheel repair; issues with mismatched or improperly maintained couplers; plus problems of scale and weight at a miniature size all conspiring to defeat the smooth running of long and short trains. Val fielded many questions that led us all into some good group discussion.

After a short break, Chip Stevens, who recently moved to our area from the HUB Division of the NER, presented a clinic titled, “Judging (Evaluating) at a Regional Meeting (or Anywhere Else),” that was originally prepared by NMRA National Contest Chair Bob Hamm MMR. Chip has been involved with scratch building, having his work judged as well as a contest judge himself at his old division and the NER. He included a handout that demystified the methods of judging, the five-part criteria used for judging entries, and how judging is approached and  accomplished at a typical regional meet. He provided forms for members to follow for the various categories found at a regional contest such as structures and motive power. His presentation was positive and insightful for those holding or entering contests as well as for those working on their achievement certificates. Again there was lively Q&A, and good discussion from the group. By the way, you may have seen Chip handling the video camera at our meets. He has also volunteered as publicity chair for the 2019 MER Convention.

With the two presentations complete, Senior Director and Chair of the Nominating Committee John Seibert announced the election results for the three available Board positions. Bill Fagan and Mark Wallace were re-elected, and Mike Dettinger was newly elected.  Chip Stevens was thanked for participating as a candidate in the election.

This was followed by a short Show ‘n’ Tell where an enthusiastic and frequent visitor from Susquehanna, Dennis Blank, showed his decoder test track and his latest modeling efforts. Our 50/50 raffle was won by Steve Richardson, who once again generiously donated his half back to the Division. And, of course, door prizes were awarded to many happy recipients. The meeting wrapped up about 11:45am and was followed by the MER 2019 Convention Meeting where reports were shared and a name was picked.  More about that in Chairman Rob Hinkle’s report below.

Gracious thanks to member Ron Albert along with the Philadelphia First Church of the Brethren for providing us a wonderful meeting location. Thanks also to the clinicians,Val and Chip, as well as to all of our candidates and to all who volunteer to make these meets happen. Thanks to the layout owners for allowing us to visit and enjoy their model railroading efforts. We hope this was an enjoyable time for everyone. Our next meet will be at the Perkasie Firehouse Meeting Hall on  Sept. 8th.  Hope to see you all there!