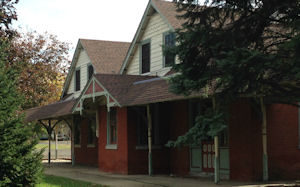 For the better part of a decade, our January Meet has been held with the NJ Division and this year was no exception. About two dozen of us traveled to Grace Episco-pal Church’s auditorium in Merchantville, NJ for this year’s edition. Our gracious hosts as usual provided refreshments—coffee and donuts— as well as swap tables, a model contest, and more.

First up was Jersey’s Fred Willis’s offering of a story about the “Crystal River Railroad.” This was an obscure railroad in Colorado that hauled mainly two commodities, coal and marble. It was constructed as a combination of standard gauge and narrow gauge operations that would fit the interests of many model railroaders who already combine these gauges on their own layouts. For example, using the 30-inch gauge models that one finds on the market with O scale (On30) or HO (HOn30) with the appropriate size track (HO for On30 and N for HOn30). The Crystal River Railroad traversed some very difficult terrain, served small isolated mountain towns, and created many interesting features that modelers could consider in their own modeling activities. Some will recall Fred’s joining us several years back during a 2017 September meet where he presented a clinic on scratch building a station.

Next our Achievement Program Manager Dave Messer, MMR, presented the “Author” certificate to Philly member Glyn Thomas. Glyn has been actively qualifying for certif-icates in numbers that have finally landed him the honor of Master Model Railroader.

Joe Walters presented our second clinic on “Scratch Building a Depressed Flatcar with Load.” Joe has been presenting a series of very accessible, down-to-earth, easy-to-follow modeling clinics and this was no exception. While the flatcar has been a part of the railroading world since the very beginning, the depressed flat car is a variant that allows the shipping of tall, heavy, extra-wide loads on a car featuring many different axle configurations depending on the load. Variations include the 4, 6, 8, 12, and 16 axles. The 16-axle cars are capable of carrying more than 100 tons or a load that is longer than 89 feet. This type of rolling stock typically moves electrical transformers, electrical or mechanical power equipment, and large pieces of industrial production machinery. Joe demonstrated how he built this car using a combination of styrene and resin castings with patterns and techniques for mass-producing multiple pieces to build up the car bed. He showed his techniques for constructing the transformer load that used styrene and over 100 odds-and-end parts. A finished version of this car was displayed at the MER meet in Rockville, MD and received a merit award of 90 points.

Despite the challenges of low water pressure in the neighborhood, our Jersey hosts were very accommodating with plenty of coffee and donuts, while we naturally supplied the Philly soft pretzels.

The afternoon featured open house tours at some excellent layouts. Of interest to the Philadelphia crew was the opportunity to visit Glyn Thomas’s Minnesota Commercial Railway layout at his nearby Philadelphia home. Glyn had invited AP Manager Dave Messer and AP Committee Chair Earl Paine to review and judge for “Cars” and “Locomo-tives”.and since I was carpooling, I tagged along. Glyn has been model railroading for many years and has built both English and American prototypical models. His modeling space was a well lit portion of his basement that includes a workbench, his latest layout, a sector plate for staging, and several stands or shelves for displaying models— locomo-tives, engines, cars, both passenger and freight including several caboose models—all very tidy. Dave and Earl sat at his workbench and viewed each of the models for both certificates while asking questions as Glyn explained in great detail his approach and methods of construction. Glyn’s layout is very detailed yet compact but, I don’t want to steal his thunder for his article which will appear in the next issue.