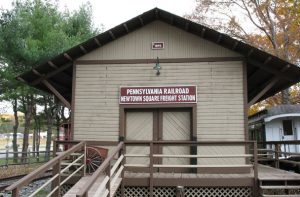 On Saturday June 8th, 2019, the Philadelphia Division returned to the Newtown Township Municipal Building meeting in the recently renovated township meeting room.  The morning session began with our Annual Business Meeting hosted by Division Superintendent Charles Butsch. Charles welcomed everyone and called the meeting to order. Charles mentioned that minutes in audio format (.mp3) from the 2018 Annual Meeting are posted on the Division website for anyone who wanted to review them. He then gave an update on Division business and what had occurred over the past year.

John Seibert provided an update for the clinics for the MER convention followed by Bill Fagan’s update on open house layouts for the convention.  Assistant Superintendent and Convention Chair Rob Hinkle gave a brief update on other aspects of convention status including the convention’s new Facebook presence.

After opening up the meeting to final questions and comments from the attendees, the business meeting was adjourned by Charles.

Joe Walters presented the first clinic, “Scratch Building the Sperry Rail Car.”  Joe has over 30 years of railroading experience and he always carries that experience as well as his unique humor into his clinics. Joe talked about the history of the Sperry rail cars and how they have evolved over the years. He then introduced the model that he had built and talked about the features of the more recent series of the cars. He showed the entire process in constructing the model from taking bare plastic and building up the car section by section until he ended up with one sub-assembly,  and then continuing the process again until he’d gotten all of the parts required to create the model. Joe talked about how he created the flashing lights on top of the model that add additional detail and interest. Following his clinic, Joe received his seventh AP certificate, Motive Power.

After a short break, Mark Wallace presented the second clinic, “Model Train Operations & Dispatching – A Functional View, Part 1.” Mark has been attending numerous operating sessions around the Division and in his experience of dispatching on them, has worked out a number of rules that he recommends following for operations. He discussed the three basic functions in railroad dispatching, and how to apply them to model railroads. He also talked about and shared various rulebooks used in the industry how best to apply them in operating sessions. Mark wound up presenting a great deal of information and everyone was very interested in hearing Mark’s second part of the clinic hopefully soon.

After our 50/50 and door prize drawings, we held a Show ‘n’ Tell period where a number of presenters from the Philadelphia Division and elsewhere discussed their projects. MER Secretary and Superintendent of the Potomac Division Martin Brechbiel brought some scratch-built O-scale models. Dennis Blank from Susquehanna showed off some N-scale models that he had weathered a number of years ago when he was in a model railroad club in Florida.  Joe Walters again pointed out additional details on his scratch-built Jordan Spreader as well as some of the other cars he has scratch built, and then finally Mike Dettinger presented his imported train from Japan that includes a small camera inside one of the commuter rail cars.  Mike is working on getting it set up (instructions are all in Japanese) and we expect to see it working at a future Division meet.

The meet wrapped up around noon and was followed by the MER 2019 Convention Meeting where various reports and aspects of the convention were discussed. Be sure to look for additional, late-breaking convention information elsewhere in The Dispatcher.

Gracious thanks to Newtown Square Mayor and fellow NMRA  member (and former super ) John Nawn for the use of the Township Building, a truly high-tech space that was very comfortable for all.  Thanks also to Joe and Mark for presenting interesting clinics and to all of the layout owners allowing us to visit and enjoy their model railroading efforts.

Our next meet will be a session focused on the final planning and volunteer orientation before the start of the Liberty Bell Special convention. Anyone interested in volunteering any of their time during the convention is encouraged to come out, get more information, and then sign up for a volunteer’s spot. Hope to see you all there!

[sc name=dropcap2 l="W" ]ith the successful running of the 2019 MER Liberty Bell Special by your Philly Division, we…