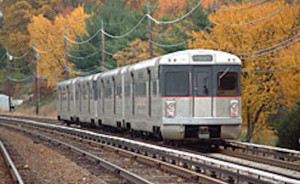 As has become customary, the Philadelphia and New Jersey Divisions joined forces to cohost their mid-winter meet at the Haddon Township High School cafeteria in Westmont, New Jersey on Saturday, January 9, 2016.

The program began with Jersey member Ed Sproles presenting a clinic titled: “Build Your Own Resistance Wheelsets.” Ed described the process of building resistance wheelsets via PowerPoint presentation, including examples of his work as well as a live demonstration of the process.

Locomotives, as well as rolling stock with lighting, such as a passenger car or caboose, draw power from the rails that can be used to electronically sense occupancy on a particular segment of track and relay that information to various electronic systems. But what about track occupation detection for other rolling stock such as freight cars? Modelers of modern day operations no longer use cabooses. Resistance wheelsets provide the answer. When these are used on any freight car or piece of rolling stock, a small amount of current flows from one rail to the other through the wheelset, thereby providing the power to effect occupation detection. Two applications among many others could be lighted railroad crossing signals or signaling systems.

Using miniature cameras mounted on a flat car in front of the locomotive, Bill has developed a successful technique of capturing a unique view of a model railroad. While on one hand allowing viewers to become 1:87 scale engineers in the cab, this also enables close-up observation of the layout’s track plan, scenery, structures, and operation. This proves not only to be entertaining, but particularly helpful in assessing the quality of the layout owner’s workmanship.

And then, what is a Jersey meet without all the other stuff? It was all there…the contest, the coffee and donuts, the camaraderie, and the swap tables, too. There were several layouts open in the afternoon as there had been the night before. All in all it turned out to be another successful meet.

2015 meet photos added to the "About Us--Photo Gallery" section.